Doll Prams Inspired by Prams of the Past

It is not known who first came up with the idea of ​​producing prams. We only know that the first patent was filed in England in 1853 and that the first models were subsequently manufactured in Germany. These first models did not have much in common with the modern prams. They were not pushed on but instead pulled on. Their baskets were woven and their chairs had a drawbar. In 1870 the towed pram became a push pram. This then became a great success and evolved in the pram as we know it today.

The Petite Amélie wooden doll prams and also our cradle Petite Wagon are inspired by the old prams of yore. ..These are still our most beloved designs :)

Petite Amélie designs products that
grow with your child. Along with creating
beautiful pieces, our collections are
made with the conscious mum in mind.
We focus on safety, sustainability and value.

Fair materials and neutral shapes
and colours allow you to create your
own unique space for your child.

Our children's toys and furniture
are carefully manufactured from
solid, responsibly-sourced materials. 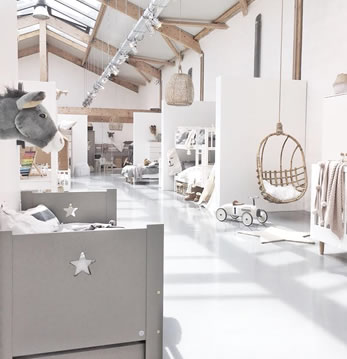